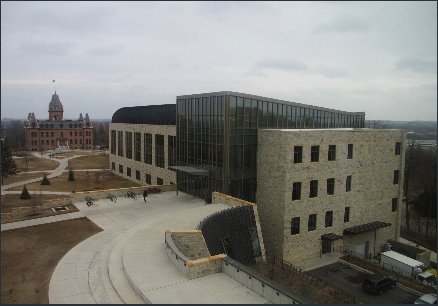 The College of Wooster has begun exploring options for renovating or replacing Mateer Hall, the primary biology and neuroscience building on campus, citing space concerns and a desire to incorporate more modern teaching methods. An ad hoc committee of professors from the biology, chemistry and math departments, along with Provost Carolyn Newton, spent part of their spring break touring colleges in Iowa, Minnesota and Wisconsin with recently renovated or newly built science facilities, gathering ideas to be eventually incorporated into Wooster’s design.

“We have amazing opportunities for students to do research with faculty in the life sciences … those faculty and students need to have spaces to facilitate that work,” Newton said.  “We want our space to reflect our mission.” To that end, the Provost has been working closely with biology professor Dean Fraga, chemistry professors Mark Snider and Melissa Schultz and Professor of Mathematics R. Drew Pasteur. “The administration is definitely on board,” said Schultz.

Like Mateer itself, the desire to renovate or replace the building is not new. It was built before the rise of the biochemistry and molecular biology (BCMB) department, which swelled the number of faculty and students in the building and required different labs and equipment. Mateer was “built for a different era and different ways of teaching … [BCMB is] interdisciplinary and collaborative, but the facilities we have get in the way of that,” said Fraga. The classroom designs also make it difficult to work in small groups, which has become more popular in the science departments in recent years. “A reconstruction of Mateer would be a very welcome change,” said professor of biology James West.

“I think from the moment I arrived on campus, I’ve heard from science faculty, particularly from those who are in Mateer, that Mateer needed attention,” Newton added.

To that end, the group hit the road over spring break, visiting St. Thomas, Macallister and St. Olaf in Minnesota, Grinnell in Iowa and Beloit in Wisconsin and searched for ideas. The group was especially impressed by St. Olaf College’s Regents Hall of Natural and Mathematical Sciences, which opened in 2008. The $63 million, 200,000-square foot facility houses all of St. Olaf’s science departments.

Instead of grouping professors’ offices by department, Regents Hall is designed to bring together professors that share research interests. “It was much more welcoming,” said Fraga. Its multi-purpose classrooms are designed to accommodate both small-group work and lectures. Regents Hall also makes extensive use of natural light, with a system of overhead windows that allows outside light to penetrate all the way into the interior of the building. The building was certified platinum by the U.S. Green Building Council in 2009.

To incorporate the best aspects of St. Olaf’s facility, the committee came up with two main options. The first is to expand into the Gault Alumni Center parking lot, which would entail renovating Mateer or replacing it entirely. The second option is to build an entirely new building for biology, chemistry, neuroscience and BCMB, among other things. However, “there are no limits on options at this point. Nothing is off the table,” said Newton.

The likely next step for Wooster is to commission a feasibility study in the next 1-2 years. Talking to an architect, working out a design for the building and so forth will take even longer. “Planning and fundraising takes time,” Newton said. “In some institutions, planning was six to eight years before construction started … That time can be positive if it’s used properly.”

“I think it comes down to what makes sense for Wooster, and what we can afford,” said Schultz.