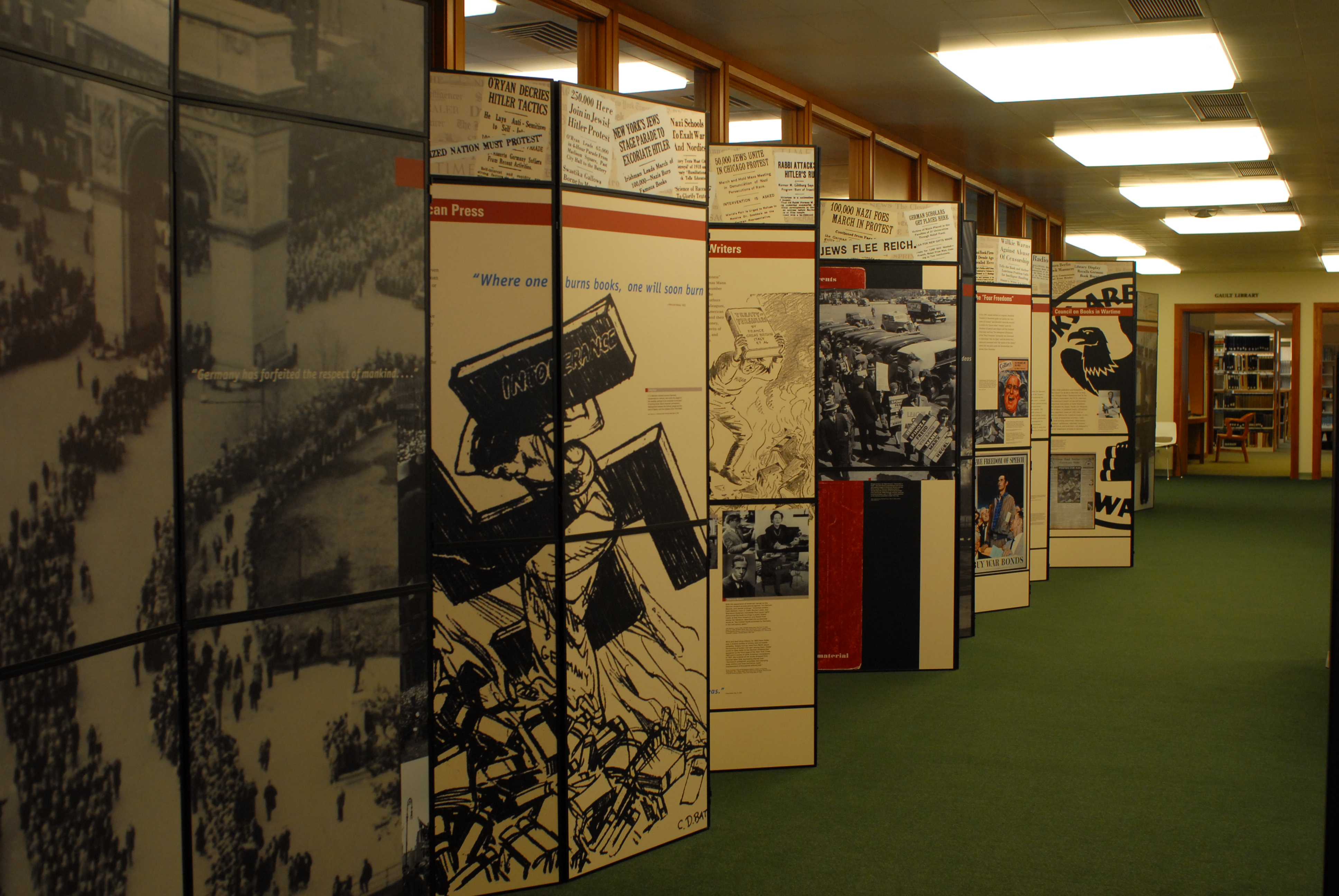 Bass speaks at “Fighting the Fires of Hate: America and the Nazi Book Burnings”

The exhibit “Fighting the Fires of Hate:

America and the Nazi Book Burnings,” a traveling display from the United States Holocaust Memorial Museum, officially opened on Sept. 22 with its keynote speaker, Dr. Leon Bass. Bass initially seemed to be a soft-spoken man, but he soon showed his prowess as a captivating, dynamic speaker. His passion for the subject built throughout his speech as he described his experiences as an American soldier in World War II and his encounters with racism within the U.S. Bass opened his speech by crediting his parents and several of his teachers, calling them the “giants” he has leaned on throughout his life. He said that he was speaking to and for them.

Despite his parents’ misgivings, Bassnrolled in the army at age 18, where he got his first taste of institutionalized racism by being separated from the white recruits. His battalion was first sent throughout the South, where they struggled with the ignorant racism of Southern society. They were next shipped to England and then to France, where they built the bridge during the Battle of the Bulge that allowed for the rescue of the 101st Airborne.

The soldiers then went into Germany, where they participated in the liberation of Buchenwald, which was a truly harrowing experience. Bass saw what he called the “walking dead,” people who seemed only

made of skin and bones with skeletal faces, sunken eyes and sores from malnutrition. He saw jars of body parts and a lampshade made of human skin from Nazi medical experiments, a torture building with blackened blood on the floors and instruments on the walls, heaps of children’s clothing despite never seeing a single child, and piles of bodies outside the crematorium. Even years after returning home, Basscould “never forget” the atrocities he witnessed at Buchenwald. The recurring theme of the speech was Bass’s lifelong struggle with society telling him, “Leon, you’re not good enough.” He heard this sentiment implied in the segregation of the army, in being turned away from restaurants and water fountains and being forced to stand in the back of a bus for a 100-mile ride when there were seats available in the section reserved for whites. Bass described himself in his youth as an “angry black soldier,” thirsting for retribution for the wrongs committed against him.

However, the experience of seeing the sheer depravity of Buchenwald awakened new passions in Bass. He realized that “human suffering is not relegated to me; pain and suffering can touch all of us.” He vowed to do something about hate and suffering in his own country. He returned to the U.S. to get an education, becoming a teacher and later a principal. Bass has worked in both white and black schools, including some of the worst in the country.

Bass urged his audience to “love the unlovable.” Even after experiencing the worst side of humanity, Bass remains committed to his cause; he wisely stated that, “we can’t solve our problems with violence, we must solve them with love.” Wooster Activities Crew is reinventing Homecoming this year. In past years, Homecoming has been an event that brings alumni and current Wooster students together. WAC has always provided late night activities during the Saturday night of homecoming weekend, but this year they have decided to go above and beyond everyone’s expectations.

Traditional Events Director Kevin Dinh ‘14 took on the project with the intent of bringing life into homecoming weekend. “In the past, homecoming was kind of an afterthought,” said Dinh. “This year I really wanted to make [homecoming weekend] like Winter Gala to provide students with an opportunity for more things to do.”

The largest difference  between Homecoming and Winter Gala will be the lack of a chocolate fountain. However, WAC will be providing plenty of snacks and activities to make up for this loss.

Students will have a chance to win up to $1,200 in gift card prizes throughout the evening at different games. The gift cards are from community businesses,including Muddy Waters, Broken Rocks, City Square, Starbucks, Panera Bread, Wal-Mart and Chipotle. The amount of each gift card will vary by institution.

Like Winter Gala, Homecoming will be themed. Homecoming’s theme this year is “Out of this World.” Dinh describes the theme as being similar to an outer space theme without science fiction undertones. “That feeling you get when you’re in the middle of nowhere outside and you are looking up the stars and you just want to be up there and everything is just peaceful and right,” said Dinh.

To create this peaceful feeling, Lowry Ballroom will be decorated with hundreds of paper lanterns, creating an atmosphere that hopes to be serene and inviting.

Quemar Reid ’12, also known as DJ Ricky Bobby, will be DJing the event. He will be providing a variety of music all with an Underground dance party vibe.

This event is open to all students and visiting alumni. It will begin at 9 p.m. and  end at 12 a.m. The  attire is semi-formal, semi-casual and dates are not necessary. “Homecoming is going to be a wonderful opportunity for Wooster students and alumni to reconnect and enjoy their alma mater,” said Dinh.

The week kicked off with an off- campus service trip Sunday afternoon. Spearheaded by IGC co-president Dana Obery ’13, the members of the Greek community trekked into the country to put together a haunted house. Students came out to help clean up the barn it is taking place in. “We just wanted to do something good with resources we had,” said Obrey. Whether they were pushing hay, hanging up decorations or weeding, upwards of 50 students came out as a community to help this project come together. “We just wanted to do something that could get us out into the community helping,” said Obery.

Tuesday’s event was a Rush Fair. Held in the 2nd floor of Kauke in the study area, it provided the Greeks with an opportunity to get to know the first-year students.  This also gave the social clubs  the opportunity to reach out to faculty and show them what their students do outside of the classroom.

Wednesday evening, the groups invited the campus to come hang out and play games outside of Kenarden. The members of Sigma Phi Alpha grilled for the campus, and Chipotle donated food.  On Thursday, Greeks once again proved just how important service is to their community by holding a competitive can drive.  The competition was based on the number of cans collected by each Greek group as well as each of the group’s presentation of their cans.

The Fall 2011 Greek Week will have its grand finale Saturday at the Alumni tailgate. The tailgate is only open to Greeks and their Alumni who are here for Homecoming. There will be hamburgers, hot dogs and other picnic food. A competitive cornhole tournament is scheduled to occur, with winners earning a grand prize of $50.

Across the board, the social clubs have been satisfied with their Greek week. “I think it has been a great way to bring the Greek community together,” said Margaret Roberts ’13. IGC social chairs believe that spring Greek Week will be even bigger and better.

Ian Benson ’14 assumed he would be spending his summer vacation like his classmates, enjoying a total lack of obligations. This vision was thrown out the window when he was diagnosed with Hodgkin’s lymphoma on July 7.

The lymphoma saga began this Spring during finals week, when Benson found a lump on the right side of his neck.

“I had a lot of scruff because I was busy studying, not shaving,” said Benson. “When I finally shaved there was a bump.”

Benson’s parents became aware of the situation when they arrived on campus to move him out and take him home. Neither Benson nor his parents knew what the lump was. So, a week later Benson paid a visit to his doctor.

After being misdiagnosed with mononucleosis by the family practice doctor, Benson went to see a specialist.

“The specialist examined my neck and then stuck a needle in it. Then the specialist, and this is a direct quote, said ‘This is worrisome,’” said Benson.

Six days later Benson received a call from the specialist who informed him that the lump was a cancerous tumor. Hodgkin’s lymphoma is a cancer that originates in the white blood cells and spreads its way from one lymph node group to another. The next step was to go to the hospital for a CT scan, which generates a 3-D picture of the body.

After the CT scan, surgery was on the horizon for Benson. First, he had a biopsy in which they cut out a part of the tumor in order to run tests.

“For the surgery they had to drug me and put me under. When they put the drugs in my arm I remember that my face felt really hot. When I tried to articulate that, all I got out was ‘My face feels really…’ and then I woke up in a different room,” recalled Benson.

From the biopsy, it was determined that the lymphoma was between stages one and two and that the treatment would consist of four sessions of chemotherapy and ten sessions of radiation therapy.

Benson found radiation treatment to be manageable aside from the “ungodly hour” at which the treatment started, but the chemotherapy was a different story altogether.

“Chemo is the worst thing in the world. They are basically pumping poison through your body. They had to give me a steroid to get me through the day, and once it wore off I was miserable,” said Benson.

The misery of the treatments paid off for Benson when the chemo and radiation sessions rendered his body cancer-free.

Throughout the entire encounter with cancer, Benson, along with his friends and family, was able to keep his spirits high. Benson lightheartedly joked, “I felt like I was 45. I woke up one morning expecting a mortgage I didn’t know existed.”

Benson was able to return to school and classes three weeks into the current semester and is thrilled to be back on campus. “I’m happy to be back and return to my mostly normal life,” said Benson.

What is Benson looking forward to now? The release of the upcoming dramatic comedy “50/50,” starring Joseph Gordon-Levitt and Seth Rogen. In the film, Gordon-Levitt will play a man recently diagnosed with cancer and will trace his struggle with the disease. To Benson, “it will be like watching my life on screen only Joseph Gorden-Levitt will be playing me.”